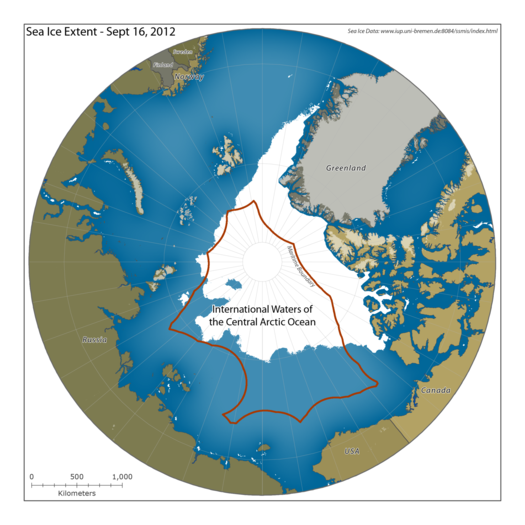 SEATTLE – U.S. officials are heading to Greenland for a three-day meeting to persuade other Arctic nations to place a moratorium on high-seas fishing in the Arctic Ocean, where climate change is melting the permanent ice cap and allowing trawlers in for the first time in human history.

The United States is proposing an agreement “that would close the international waters of the Arctic Ocean to commercial fishing until there is a good scientific foundation on which to base management of any potential fishing,” said David Benton, a member of the U.S. Arctic Research Commission, who will be part of the negotiations in Nuuk, Greenland.

The first step toward protecting the Arctic Ocean and its fish population, which has never been studied, is for the five nations bordering the body of water to reach an agreement on a moratorium. To date, the United States, Canada and Greenland are on board, but Russia and Norway have not joined in.

All coastal countries control the fisheries within 200 miles of their own coastlines. The high seas beyond that zone do not belong to any nation, are not covered by any regulations and can only be protected by international agreement.

Once the five Arctic nations are in accord on a fishing moratorium, Benton said, they would then reach out to other countries with major commercial fishing fleets, such as China, Japan and Korea, to negotiate full protection for the central Arctic Ocean.

Benton, who advises the U.S. negotiating team, said he was “cautiously optimistic” that the Arctic nations would reach agreement during the three-day meeting, which begins Monday.

“The Arctic is experiencing a fairly rapid rate of change,” said Benton, as the permanent ice melts. “That’s potentially causing large changes in the ecosystem, but we don’t understand what’s going on up there. If we want to do things right, this is the approach we should be taking.”

In 2009, the United States adopted its own Arctic Fishery Management Plan, closing American waters north of Alaska to commercial fishing until scientific research proves that the fishery is sustainable.

“What the United States did in its waters was a precautionary action that takes into account how Arctic warming is changing the ecosystem faster than science can keep up with it,” said Scott Highleyman, director of the international Arctic program for the Pew Charitable Trusts.

“There are no stock surveys or scientific assessments for fish there,” Highleyman said. “You don’t want to fish a place where you don’t know the fish population dynamics. Any time we’ve done that, it led to catastrophic overfishing.”

One example, Highleyman said, is the New England Atlantic cod fishery, which was shut down in the 1980s due to overfishing, costing 50,000 jobs.

There is much at stake in the central Arctic Ocean, of which about 1.1 million square miles are largely unregulated international waters. An open letter to the Arctic governments, signed by 2,000 scientists from around the world, notes the mysterious and fragile nature of the region.

If it is overfished, the scientists say, that will affect seals, whales and polar bears as well as the people who make the harsh region their home and rely on such creatures to feed their families.

“Until recently, the region has been covered with sea ice throughout the year, creating a physical barrier to the fisheries,” the scientists wrote. “In recent summers, however, the loss of permanent sea ice has left open water in as much as 40% of these international waters .… A commercial fishery in the central Arctic Ocean is now possible and feasible.” (Los Angeles Times)

A newly issued Alaska State Legislature report held some grim findings about women living in the Last Frontier: They earn less than men, were imprisoned at a higher rate during the past 10 years, and have a suicide rate that’s twice the national average, among other problems, including homelessness and a lack of health care.

“Some of the numbers are shocking and disturbing. Sadly, some of them are what I expected,” noted Senator Lesil McGuire (R-Anchorage) in a press release about the report, which was completed by Alaska Legislative Research Services in December but only made public Tuesday at the senator’s request. “That’s why it is important for us to figure out what’s behind these numbers and come up with solutions which make Alaska better for our daughters and granddaughters.”

Senator McGuire requested the Status of Women Report after reviewing a 2010 Alaska Victimization Survey, which interviewed nearly 1,000 women and found that 59 percent have experienced domestic abuse, sexual violence, or both.

“We were waiting until the timing was right to release the report,” McGuire’s legislative aide Amy Saltzman told Yahoo! Shine, explaining that the office had spent the start of 2013 mired in issues including the recently passed oil tax bill.

Among the state’s upsetting findings: In 2010, women working in Alaska only earned 67 cents for each dollar a man earned (the national average is a still-low 77 cents to the dollar). As for crime and imprisonment, the number of women going to prison in Alaska is growing: In 2007, women made up 6.5 percent of Alaska’s prison population, but that number had jumped to nearly 11 percent in 2011.

In the mental-health realm, the suicide rate for women in Alaska is twice as high as the rate nationally—nearly 10 percent of girls in high school attempted suicide in 2011. In addition, nearly two-thirds of Alaskan women were found to be in treatment for alcohol related problems, compared to just one-third nationwide.

As far as homelessness is concerned, only 25 percent of single people in shelters were female in 2012—but, for adults in shelters considered part of a family, 62 percent were women with children. The report cited domestic violence—which has rates in Alaska among the country’s highest—as a major cause of homelessness for women and children.

So why the raw deal for women in this state? It may have something to do with the ratio of men to women there, which was noted in the state report as being higher in Alaska than in any other state, with 108.5 males to every 100 females. Nationally, there are 96.7 men to every 100 women. (Among the women in Alaska, 70 percent are white, over 17 percent Alaska native or Native American, and just 4 percent African American.)

To begin tackling the mountain of issues facing Alaskan women, Saltzman told Shine, the senator’s office plans to host a women’s summit in the fall, which will hopefully lead to community action efforts and new pieces of legislation.

“We need to take a very serious look at these numbers and figure out what we need to do to improve the status of women in Alaska,” Senator McGuire said.  “These issues are at the core of Alaska’s high rates of domestic violence and sexual assault. If we figure out solutions to these problems, we’ll finally be able to stop those horrible epidemics and rebuild Alaska’s families.” (Yahoo! Shine)

The US Coast Guard Cutter Healy off the coast of Nome.

The Coast Guard will have a number of assets in the Arctic this season — including two ice-breaking vessels, the Polar Star and the Healy – as well as a National Security Cutter.

The biggest change will be designating the northwestern town of Kotzebue as the Guard’s Forward Operating Location, serving as the staging area for a Coast Guard helicopter and its crew. Last year, the Coast Guard operated out of Barrow, on Alaska’s northern coast and closer to the Beaufort and Chukchi seas as Royal Dutch Shell began drilling operations in those areas.  After the grounding of the Kulluk conical drilling unit near Kodiak Island, Shell decided to sit out this summer and work on repairing its rigs.

The focus for this year’s operation will be understanding traffic on Alaska’s west coast and through the 50-mile-wide Bering Strait, according to Coast Guard spokeswoman Veronica Colbath.

The region has witnessed increased traffic in recent years. Last year there were 480 transits of the Bering Strait, up from 220 in 2008. Colbath said better understanding of that traffic, and how to prepare for any potential incidents, is important to understanding the Arctic.

Colbath said that this year’s Arctic Shield shifts the focus of the Guard’s Arctic operations to western Alaska, where it can by maximize the use of existing infrastructure.

Like other federal agencies, the Coast Guard has absorbed budget cuts under federal sequestration. Part of the reason it picked Kotzebue as its forward-operating location was to utilize an Alaska National Guard’s hangar there.

The Coast Guard has no permanent infrastructure in the Arctic.

“We’re trying to balance some of the budget constraints,” Colbath said. “But we are committed to deploying the right mix of resources to the Arctic.”

With sea ice melting, shippers are looking to the region as a possible international route. Last year, 250 vessels had a presence in the Arctic, up from 190 in 2011.

“The Arctic is a vast region,” she said. “We’re still learning where we can be strategically be positioned to be most effective.

“(Arctic Shield) is definitely about lessons learned.” (Eye on Arctic)